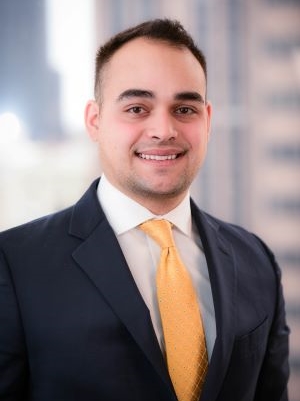 Justin Joseph is an attorney for Greer, Burns & Crain in Chicago, Illinois. His legal practice encompasses all aspects of intellectual property law, with a focus on litigation, patent prosecution, and anti-counterfeiting.

Mr. Joseph received his J.D. (with honors) from St. Louis University, where he earned certificates of concentration in intellectual property law and health law. During law school, Mr. Joseph became a registered patent agent and was a member of his school’s International Patent Drafting Competition team. He was also heavily involved in his school’s Moot Court program, where he received the Judge Robert G. Dowd Appellate Advocacy Award and was selected to represent St. Louis University in the New York Bar’s National Moot Court Competition.

Prior to law school, Mr. Joseph earned a B.S. in biological sciences from the University of Missouri. While in school, he was an undergraduate researcher, where he assisted in the research of myelin sheath degeneration in neurological diseases.

Mr. Joseph joined Greer, Burns & Crain from the Illinois Office of the State Appellate Defender. There, he represented indigent defendants in their appeals from criminal convictions and conducted oral arguments before the Illinois Third District Court of Appeals.