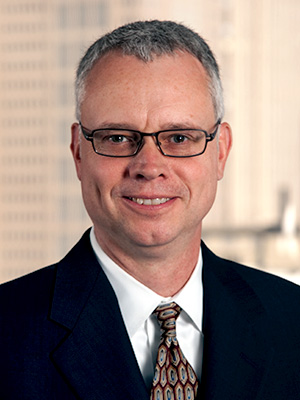 James K. Folker is a partner with GBC Chicago, and has been with the firm since about a year after it was founded. His intellectual property law practice focuses on patent prosecution, including drafting new patent applications and prosecuting applications originating in foreign countries.

Jim has also argued, and won, numerous oral arguments in front of the Board of Patent Appeals and Interferences at the Patent and Trademark Office, and has worked on several interferences. In addition, he regularly provides opinions on patentability and infringement issues.

Prior to joining GBC, Jim spent more than three years employed as a Patent Examiner with the United States Patent & Trademark Office (USPTO). His experience as a former Examiner has aided him greatly while interacting with the Examiners in charge of applications that he is prosecuting, as it has given him an insider’s view of the examination process.

Prior to law school, Jim earned a Bachelor of Science Degree in Mechanical Engineering from the College of Engineering of Rutgers University, and worked as a Project Engineer with a major manufacturer of consumer products.